Plant Research at Weizmann: Food Security for a Growing World

Home/Uncategorized/Plant Research at Weizmann: Food Security for a Growing World
Previous Next

Plant Research at Weizmann: Food Security for a Growing World

In Israel’s earliest days, Weizmann Institute scientists invented a method for waxing oranges so they could be shipped, which was a major boon for the country’s then-fledgling, agriculture-based economy. Since those days, the Weizmann Institute of Science hasn’t stopped working toward improving food security — not just for Israel, but for the world. But today the task is more daunting than ever: by the mid-21st century there will be nine billion mouths to feed; and climate change is expected to have an impact on agriculture, possibly a considerably negative impact.

Institute scientists are addressing the challenges from a variety of approaches. They are figuring out how plants can better resist drought, be grown more efficiently, provide more nutrition, and take up carbon and convert it to edible proteins and sugars in better ways — and all this without further destroying the planet’s remaining biodiversity or polluting our soils and waterways.

Weizmann Institute success stories in engineering better crops range from wheat to tomatoes to maize and melons, with work carried out by scientists mainly in the Department of Plant and Environmental Sciences. Prof. Avraham Levy, for example, developed the Micro-Tom tomato, which can be grown at a density of up to 1,000 plants per square meter and has a life cycle of less than three months, making it ideal for researching plant genes.

Micro-Toms helped reveal many genes for plant fertility, metabolism, and uptake of nutrients. They also helped Israel’s biotech industry: They were licensed to Evogene Ltd., when it was founded in 2002 with Prof. Levy’s help.

Before that, Prof. Jonathan Gressel took on a problem that was exasperating farmers in sub-Saharan Africa, where a parasitic weed called witchweed had historically destroyed up to half of the crops for many years. Prof. Gressel created maize seeds that were resistant to a particular herbicide; coating the seeds in the herbicide then kills the parasitic weeds in the soil before they can attach themselves to the sprouting maize. Yields tripled in experiments he conducted in Kenya, and the seeds have been commercialized in western Kenya and Uganda. 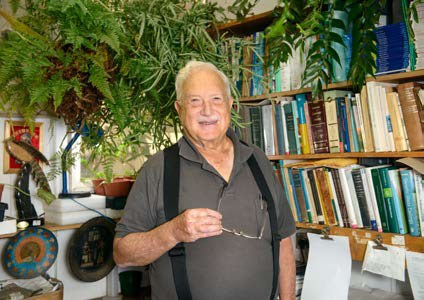 Today, work in this field at the Weizmann Institute is more diverse than ever. One of the biggest challenges is preventing the destruction of crops from pests, weather, disease, and other factors. Indeed, around 30 percent of crops worldwide are lost to such elements before they are even picked.

Plants have highly complex defense systems — scientists are still realizing just how complex these are — but they need help adjusting to the demands of agriculture and changing environmental conditions. Prof. Robert Fluhr investigates these natural defense systems. For example, he has identified a “pace setter” within the plant: a molecular switch that regulates the cells’ protein degradation machinery when the cell is under attack. By controlling the rate at which the contents of cells get destroyed, pace setters appear to limit the damage, getting rid of injured or infected cells while refraining from suicide. This finding has opened up a new avenue of research: namely, identifying additional pace setters that may regulate other aspects of plant growth and development.

Another 25 to 40 percent of a crop is lost after it is picked, due to spoilage and consumer waste. Other research in Prof. Fluhr’s lab may address the problem of fruit that looks perfect in the produce aisle, but goes bad the minute it begins to ripen at home. He and his group found one reason for that phenomenon: a fungus that hitches a ride home on the fruit, which has mechanisms for remaining quiescent until the time is ripe (no pun intended) to hijack the host’s self-defense mechanisms and promote its own growth. This research, it is hoped, will pave the way toward stopping this sort of waste.

Before they produce seeds, grain, or fruit, plants must undergo flowering and pollination. Just like an expectant mother’s pregnancy, this early stage is particularly sensitive to environmental conditions. Plant growth slows or stops as resources are diverted to blooming, and if temperatures and pollinators are not coordinated, this can spell disaster for a crop. Prof. Yuval Eshed of the Weizmann Institute, in collaboration with Prof. Eliezer Lifschitz from the Technion–Israel Institute of Technology, identified a substance that had been predicted to exist for decades, called florigen, which halts growth and induces blooming; blooming is a life-cycle stage in which the plant ceases to grow. They further discovered that florigen comes with inhibitors that are structurally similar to the florigen itself. It is the balance between florigen and its inhibitors that determines the plant’s vital “decisions” to grow today and blossom tomorrow.

Other research in Prof. Eshed’s lab has revealed a balance between the signals inherent in plants that determine leaf size. An in-depth understanding of these mechanisms could help enhance plant growth or adapt crops to changing climate conditions. 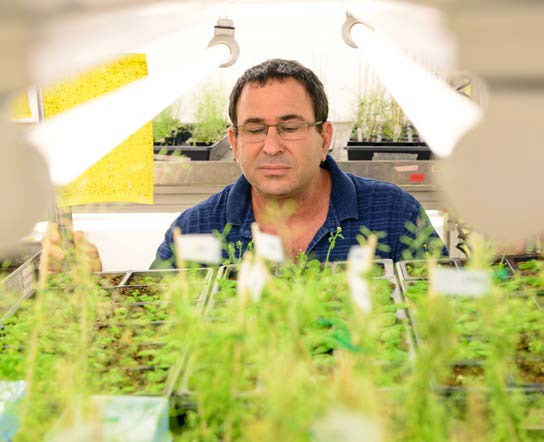 Taking the guesswork out of plant breeding

Breeding new plants for better and different tastes, faster growth, resistance to insects, and extending their seasonal availability once involved a great deal of trial and error — and a huge dose of patience. Weizmann Institute researchers are trying to take that guesswork out of plant breeding. Understanding exactly how plants respond to stress or growth conditions can help breeders tailor varieties to specific environments or needs. Prof. Asaph Aharoni studies the mechanisms that govern the production of the thousands of chemicals that plants produce.

In his lab, which is unique in Israel and one of only a few in the world, he has created the infrastructure for conducting a comprehensive analysis of the metabolome, the detailed metabolic profile of a plant. A metabolome of the model plant Arabidopsis, completed in his lab, looked something like a map of the London Underground. The “lines” in this metabolome are unique biochemical pathways that may, for example, be boosted or blocked to produce hardier, more nutritious, or tastier crops.

Among the substances Prof. Aharoni and his team have investigated is Solanine, a toxic chemical produced by green potatoes to ward off insects. Further research in his lab concerns vitamins and various flavonoids, betalains, and carotenoids — antioxidants that give color to our fruit and benefit our health. 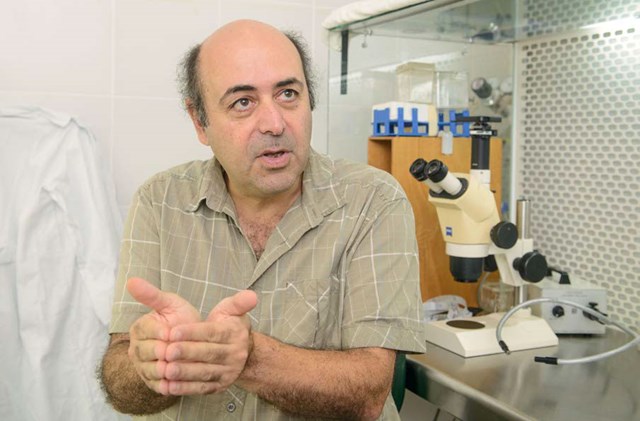 The wheat that provides bread and pasta for most of Western civilization is a challenge for researchers. Each grain carries three separate genomes; altogether, they are about six times more complex than the human genome. In the past, the Institute’s Prof. Moshe Feldman developed innovative chromosomal engineering techniques and used them to incorporate desired genes from wild emmer wheat, the progenitor of cultivated wheat, into cultivated wheat varieties. The resultant varieties are more disease-resistant and provide higher grain and protein yields, enabling the production of more food on the same amount of land.

The wheat that provides bread and pasta for most of Western civilization is a challenge for researchers. Each grain carries three separate genomes; altogether, they are about six times more complex than the human genome.

The three genomes are the result of the hybridization of three different wild wheat species, and cultivated wheat has spread throughout the world thanks largely to what’s known as “hybrid vigor” — the puzzling fact that hybrids tend to be superior to their parents, a phenomenon that is widely used in agriculture to enhance crop productivity. Prof. Levy is working with Prof. Naama Barkai of the Department of Molecular Genetics to uncover the secret of hybrid vigor, finding evidence for the mechanisms that enable the hybrid to outperform its parents. Their work explains how gene expression is reprogrammed in the offspring, and provides new insight into the genetic control of hybrid vigor.

Prof. Levy’s lab group investigates the gene-based mechanisms of biodiversity in the plant kingdom. For example, one such mechanism — a tool devised by evolution and which is the basis for plant breeding — is the exchange of segments between the chromosomes inherited from each parent to create the pollen and eggs for the next generation. This process is called “homologous recombination”; Prof. Levy’s work shows how the sites of these events are determined. In addition, he is building a new generation of vectors for precise genetic engineering in plants. These technologies are expected to have a profound effect on scientific research in plant genetics and breeding.

Originally posted at the Weizmann Institute of Science site