Rivlin thanks safari park for the honor; the calf is the 33rd born at the park, which runs one of the most successful breeding programs for the endangered southern white rhinoceros.

The Ramat Gan Safari announced on Sunday that one of its rhinos had given birth to a healthy male calf and that mother and son were both doing fine.

The 11-year-old Rihanna, named after the Barbados-born R&B singer, gave birth over the weekend at the zoological park, just outside Tel Aviv.

This is Rihanna’s third calf, following the births of Rami and Rainy Rafiki in recent years. A rhinoceros’s gestation period is usually about a year and a half.

On Monday, the safari announced that, after receiving thousands of suggestions from the public, its naming committee had chosen “Ruvi” as a name for the calf —  the nickname of outgoing President Reuven Rivlin.

President Reuven Rivlin speaks during a press conference at the President’s Residence in Jerusalem, on February 16, 2020. (Flash90) 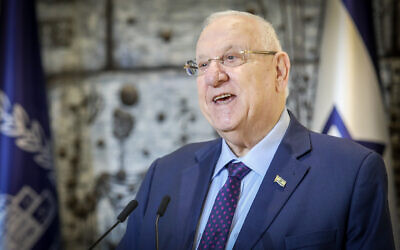 “Just like the 10th president of Israel, Ruvi the rhino is rare, special, and will put a smile on the face of all those who meet him,” the safari said in a statement, in an apparent reference to Rivlin’s usually cheerful demeanor and sense of humor.

The safari said that Ruvi will eventually be sent to another zoo, where he will “greatly help in multiplying the square-lipped rhino population.”

Rivlin thanked the safari for the honor and wished the new arrival a “wonderful life, full of happy, loving visitors.”

The southern white rhinoceros, also known as the square-lipped rhinoceros, is in danger of extinction. Some 78 zoos are taking part in a European breeding project that so far numbers over 300 rhinos. 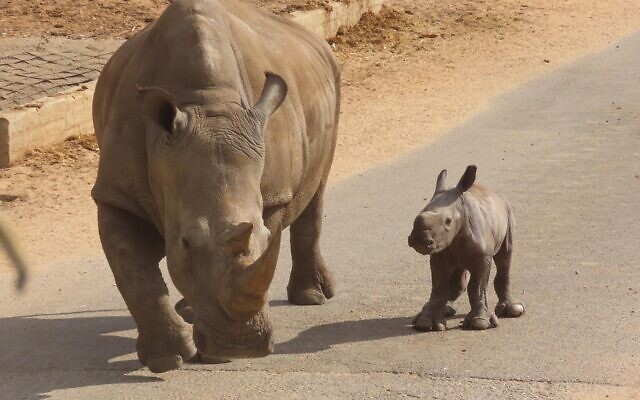 A newborn Rhinoceros stands next to her 11-year-old mother Rihanna, at the Ramat Gan Safari, an open-air zoo near the Israeli coastal city of Tel Aviv, on June 6, 2021 (Shira Inbar Danin/ Ramat Gan Safari)

The Ramat Gan Safari, whose herd is larger than any in Europe, has seen 33 white rhinos born at the park, the safari said.

The calf’s father is Atari, who has also been doing his bit for the species, having fathered calves with Rihanna, Tendra, and Keren Peles in recent years.

In the days before motherhood, Rihanna made the news, when she along with Keren Peles and Karnivala managed to slip out of the park on a brief excursion. In January 2015, the three rhinoceroses spent a few minutes on the outside after slipping through a side gate of the safari and plodding into the street, where they were spotted by astonished joggers out for a morning run.

Originally posted on The Time of Israel : By TOI STAFF on June 7, 2021